ARC Review: The Pirate of Fathoms Deep by Megan Derr 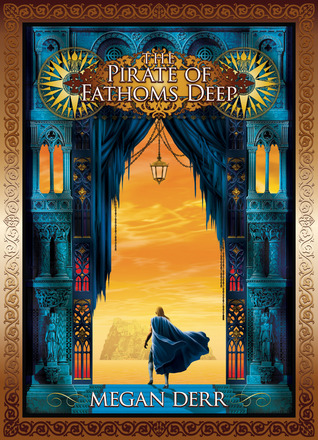 Fantasies aren't usually my thing but I somehow stumbled upon The High King's Golden Tongue and absolutely adored it wherein I then went and got lucky with this ARC (thanks netgalley and publisher!) and I loved every bit of it.

This is Lesto's story, the strong commander with the eye patch who loves to boss around the king. Though he may seem like a hard ass Lesto is in fact quite a softie and I adore him. In the first book there was a fleeting mention of a pirate who had dared punch the high commander in front of hundreds and in this book we hear more.

Shemal is a retired pirate as in he used to be a pirate but has now decided he's done with a life of crime and just wants to live peacefully, but trouble wont let go and when some halfwit thugs wind up on his doorstep asking for help with a kidnapping his life gets upended once more, for the "noble" the idiots thought they'd acquired is none other than the high commander Lesto Arseni, the same man he’d punched and then had a quick and hot encounter with and hasn't been a been able to get out of his mind. There's no way he's letting this sexy Commander get hurt even if helping him means endangering his own life.

Lesto hasn't forgotten the sexy Pirate and now here he is again, this time Lesto's not going to let him run. The pirate of Fathom's deep is his, who cares how much his brother and the king will needle him about it. Once an Arseni makes up his mind there’s no changing it.

Both Lesto and Shemal are such sweetheart loveable characters with hard exteriors like M&Ms!

I really enjoyed this book it was shorter than the first but that just means it had less long winding story and had much more sex, who would have thought The High Commander Lesto Arseni of Fathoms Deep was such a hungry little bottom. I've really enjoyed this series honestly Megan Derr is not an author I've had much interaction with maybe It's time that changed for this series has been great and I plan on reading the next one as soon as It's out.